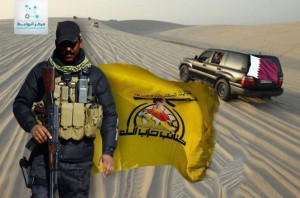 It is mentioned that unidentified  armed elements riding  a number of vehicles, kidnapped a number of Qatari wild hunters, late last year, in the desert of Muthnna province  in Iraq ,  the Qatatris were on a hunting  trip, and in a matter of days , the Qatari government has learnt that the body responsible for their abduction are Iraqi  Hezbollah  battalions, and they are being held in different parts of the province of Nasiriyah in southern Iraq.
those battalions are considered  of   the most powerful militias in Iraq so that no  Iraqi force can  , whether was security or military,  to stop its vehicles at security and military checkpoints . Qatar seeks release of citizens abducted in Iraq

In order to release the  Qatari hunters ,the Qatari government has been active  by using diplomatic mediation and across multiple bodies and  the first was by the Iraqi  file official in Hezbollah – Iraq Sheikh Alcauthrana, and the second was by some Iraqi traders who are close to the Qatari ambassador  and not resident in Iraq, and the third  was  by some respected political figures in Iraqi society, where those figures were able to hold talks with Iraqi Hezbollah Brigades lasted for several weeks, but the talks and mediation failed to reach a settlement for the Qatari hostages crisis in Iraq .

However the absence of Iraqi sovereignty in general and internal sovereignty, in particular,  as Iraqi Prime Minister Haider al-Abadi and security organs know who was responsible for the kidnapping of Qataris but he does not have the papers of physical power  what it takes to find a solution for kidnapped crisis. This inability to resolve this crisis constantly confirms that Haider al-Abadi is  just a figurehead of the popular crowd and not the actual head to them, and that the real key to this crowd are the Iranian Revolutionary Guards. Assuming that the Iraqi Prime Minister Haider al-Abadi is the actual president of the crowd, why his orders do not apply to the Hezbollah Brigades of Iraq, one of the factions of the popular crowd and to order  it for  the release of the abductees? As for this incident has the negative repercussions on Iraq before the International Community, but these battalions and their allies  in the Iranian regime did not care for it, and in a meeting between some of the National Alliance figures ,and  security, military and political figures in the regime, including Qassem Soleimani, they tried to explain to those characters the negative effects of the kidnapping but they did not show any interest mentioned by them.

There is no doubt that the kidnapping of Qatari hunters process  come completely stuck with the polarization taking place in the regional environment, especially after the outbreak of the Syrian people’s uprising against the regime of Bashar Assad and  Qatar was standing along with Saudi Arabia and Turkey to demand the departure of the Syrian president   from government whether  through diplomatic settlement or leave by military force, and support of the State of Qatar  to the  Yemeni legitimacy  of Yemeni President Abed Rabbo Mansour Hadi and the participation of the State of Qatar and the Arab alliance in a Decisive storm operation  against Shi’ite Iran’s allies in Yemen , and the pursuit of the State of Qatar with the new leadership in the Kingdom of Saudi Arabia under King Salman bin Abdulaziz, in the exercise of Arab role in Iraq to curb Iranian influence, after the Arab states discovered the strategic error which occurred and of that there is no  Arabic  agenda in dealing with Iraq after the stage of former President Saddam Hussein, in other words, the absence of an Arab vision for the next day to the US occupation of Iraq, which got it fully under the Iranian influence with the exception of Iraq’s Kurdistan region.

It is worth noting in front of these  political data  that the kidnapping is not to get money but to blackmail the political positions of the State of Qatar, this kidnapping is  of a political dimension to limit the rush of Qatari policy in the Arab surroundings and started going against the Iranian and Russian policy orientation and their allies of the states as a Syrian regime and non-State actors like Hezbollah Lebanese . Despite the keenness of the State of Qatar for the safety of its abducted citizens  by the Iraqi Hezbollah Brigades, but its foreign policy is still in contrast to the axes  of the “Russia and the Iranian regime and the Syrian regime,” and the evidence for this is by the confirmation of  Qatari Foreign Minister Sheikh Mohammad Bin Abdul Rahman Al Thani, stated : The “send ground troops to Syria within the framework of the international coalition to fight ISIS- al” Daash “, it has become a” necessity. ” He also said, the minister , during a panel discussion  at the Munich Security Conference, which was held in Germany that “the issue of readiness to launch an operation in Syria,” is not a new plan, “adding that” in fact, this was planned with the United States, which leads the international coalition, ” and that “if the need arises to send ground units to Syria, it should happen under the leadership of the coalition.”  this statement comes in conjunction   with the announcement of the Kingdom of Saudi Arabia and the United Arab Emirates  of their intention  to intervene by land  to counter  ISIS  , “Daash” in Syria, as it was planned to reach    at the end of the month of February  a group  of the Saudi Arabia Air Force fighter jets  to Turkish base  “Angerlink”  in preparation for military land intervention in Syria .

What complicates the release of  Qatari abductees   in Iraq that   the Iraqi Hezbollah Brigades do not have structural or organizational hierarchy , this is  at the level of battalions, but on the level of Iraq, there is no political or religious power in it, that can influence  the decision of the Iraqi Hezbollah Brigades to release abductees. Proof of this is that the religious marja with great importance of Sayyed Ali al-Sistani who  had requested the release of the abductees , but his request was refused  by the Iraqi Hezbollah Brigades, and this refusal may be strange for those who are not acquainted to  the thinking of the Jaafari  doctrine   , the twelvers  but for those who are familiar with it ,  will find that refusal  comes within the normal context of that thought .

The only person in accordance with the thought Jaafari , the twelvers  who has the ability to influence the decision of the Iraqi Hezbollah Brigades, is not found in Iraq, but in  the system of  a neighboring state, and that is the  Iranian regime, specifically the character of the Iranian Supreme Leader Ali Khamenei . According to this doctrine , the Iraqi Hezbollah Brigades  are of its imitators, and if it is issued, it shall implement without any procrastination. Accordingly, the Qatari state that works for the release of its nationals in Iraq should  not depend  on any mediation or talks that do not produce tangible results, and they should also realize that the solution  and key to the Qatari hostages crisis is   in the Iranian capital Tehran, specifically the Iranian Supreme Leader Ali Khamenei Office, so with his  influential on the Iraqi Hezbollah  battalions , the crisis can be  resolved, noting that he is the  more accurate title to address the crisis and without him is to be considered as a waste of time and effort . and what  confirms this ,  the release of  the abductees  yesterday who are nationals of the United States of America, which was still described by  a literature of the Iranian revolution and velavat-  Faqih   as state of the “Great Satan”, who were kidnapped in the month of January by the Iraqi Shiite militias affiliated to the Iranian regime, it has been ordered from Tehran to its militia in Iraq to release them  so that these kidnapping  do not affect negatively on the US-Iranian relations  after the lifting of international sanctions on the Iranian regime. In this context, we wonder: If the abducted nationals of the “Great Satan” were released, why they do not release Qatari hunters  who  are combined with  Iranian regime with religion and  geographic neighboring .