Iraq’s top Shiite cleric on Friday denounced the killing of a teenager whose body was strung up by his feet from a traffic pole in a Baghdad square, as conflicting versions emerged about what led to the 16-year-old’s death.

Security officials initially told The Associated Press that he had been beaten to death by an angry mob after he killed four anti-government protesters and two shopkeepers in a shooting spree. The officials, who spoke on condition of anonymity in line with briefing regulations, provided what they said were the names of four of those killed, saying they ranged in age from 18 to 31.

Spokespersons for the ministries of interior and health said Friday only that the teen had been killed. Interior Ministry spokesman Brig. Khaled al-Muhanna said an investigation into the incident was underway.

Grand Ayatollah Ali al-Sistani, the nation’s top Shiite cleric, called the teen’s killing a “horrific crime” that must not be repeated and urged Iraqi authorities to hold the perpetrators accountable. 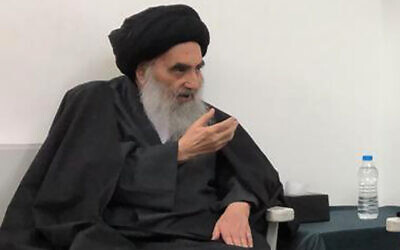 In his weekly sermon, delivered by a representative, al-Sistani also condemned recent killings, kidnappings and assaults on protesters. He added that only the judiciary has the authority to inflict punishment on offenders of the law.

Officials in Iraq often provide conflicting accounts of the same incident, particularly in the context of Iraq’s chaotic anti-government protests.

ALA TALABANI WILL ATTEND THE NEXT PARLIAMENTARY SESSION